Create an Account - Increase your productivity, customize your experience, and engage in information you care about.


Longwood’s Historic District encompasses roughly 190 acres and has 37 contributing structures. It became part of the National Register of Historic Places in October 1990. The District, the heart and soul of the city, is well hidden near the intersection of State Road 434 and County Road 427.

Describing this area as “quaint” would be a major understatement. In addition to the Longwood Hotel, the Historic District boasts a handful of historic structures, including the 1873 Inside Outside House (now home to a small business called Culinary Cottage), the 1879 Christ Episcopal Church and the 1885 Bradlee-McIntyre House, a former winter cottage and fine example of Queen Anne-style architecture. 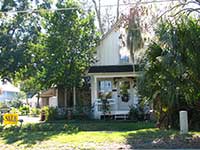 The Historic District also contains City Hall and a number of city administration buildings, as well as a new 10,000-square-foot, $1.4-million Community Building. In addition, a couple of specialty stores and boutiques can be found here.

One of the major goals of city officials is to attract more residents and visitors to this charming area. However, the Historic District remains a work in progress.


Two years after he laid the first railroad line from Sanford to Orlando, EW Henck built a rambling 38-room hotel, followed five years later by a second hotel, which was later destroyed by fire. His hotel would survive the severe freezes of 1894 and '95 that wiped out citrus groves and forced settlers to pull up stakes. Henck sold it in 1910. 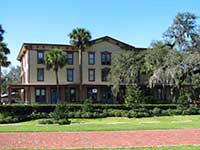 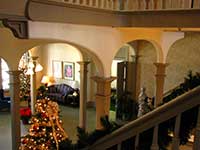 The hotel underwent numerous name changes under several owners. George Clark bought it in 1922 and changed its name to the St. George Hotel. When Clark died in 1923, his brother, Fred, renamed it the Orange and Black. In 1927, the heads of 32 states slept at the inn during the National Governors Conference. During the 1930s, the Orange and Black was a gambling casino, luring visitors from throughout the state. During the 1950s, baseball umpire George Barr ran an umpire school there.Longwood Village Inn In 1966, the old hotel was the set for a movie called Johnny Tiger, starring Robert Taylor and Chad Everett. Historic preservationist Grace Bradford saved the dilapidated flophouse from being razed in 1972 and gave it its present name, the Longwood Village Inn. Since its million-dollar restoration in 1986, it was been used for professional offices.


Floridians often have an inferiority complex because they think of historic architecture as being Inside-Outside House only in New England or Colonial Virginia. “Actually, Florida has a rich potpourri of architectural styles in its history brought into the state from other places,” University of Florida professor F. Blair Reeves says. In the late 1980s Blair helped The Florida Association of the American Institute of Architects compile the Guide to Florida's Historic Architecture.
When settlers from North Florida, Georgia and the Carolinas arrived in Central Florida, they built their log homes of heart pine they cut down to clear land for planting sugar cane, cotton and orange groves.

Their crude cabins had porches on two sides and long hallways down the middle. Mud and sticks were used to build fireplaces. Kitchens were built away from the homes to avoid the spread of fires, according to the architectural guidebook. With the arrival of railroads to Florida's interior in the 1880s, home builders soon had new materials: bricks, tile, milled lumber, cast iron and hardware. Spurred by land speculation, Sanford, Orlando and Kissimmee became boom towns. Elsewhere, tourists discovered Central Florida's many lakes and built winter homes.


In some cases, building materials were imported. In other cases, railroads and coastal schooners carried prefabricated houses to Florida. The 1872 Inside-Outside House, now part of Longwood's downtown historic district, took its name from its unique construction that features support studs on the outside. The prefabricated house was built in New England by a former sailing captain and is believed to have been patterned after 19th century whaling ships, the cabins of which had the same style of construction. It was dismantled and shipped in 1873 by schooner to Florida where it was hauled inland to join a cluster of winter cottages at Snow Station,


The Inside-Outside House is 1 of 2 historic structures saved from Altamonte's suburban sprawl. Many of the city's oldest winter cottages were burned as city-sanctioned practice for firefighters. That same fate was planned for the captain's old home and the 1883 Bradlee-McIntyre House, both now listed as architectural treasures. The late Grace Bradford and the Central Florida Society for Historic Preservation rallied community support to move the old homes to Longwood's historic district in 1973. Once standing in the path of progress, the Bradlee-McIntyre stands today as the district's centerpiece and the only remaining winter cottage of its size built in the 1880s when Florida was first being discovered as a vacation mecca. Many of the homes listed were vacation homes used for a few weeks a year, including the Bradlee-McIntyre. 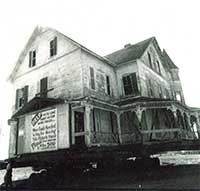